The entire world is valiantly battling the COVID-19 pandemic. Majority of us might feel more alone than ever, confined to our homes and sometimes even separated with the loved ones. It’s in times like these that it becomes ever more crucial to remember that we are all in this together. We need to minimize the emotional distance with the world – and what is the better way to do that than to reminisce good times filled with inspiration and compassion? Last month, an enthusiastic CR HOPE team visited a small village in Kenya to learn from the inspiring women of Kadzinuni how to produce bio-charcoal, also known as biochar, and bring clean energy and social change to the communities.

Community of women paving the way for clean energy

In October 2019, CR HOPE partnered with the BioSmart initiative, headquartered at the Exeter University, to introduce a new biochar production methodology to a small community of women in Kadzinuni, a village off the coast of Kenya. We have been paying close attention to the life of the local group of women ever since and how the production of bio-charcoal is now helping their community move to greener sources of energy, while generating supplemental income for the women and their families.

The inspiration and incredible energy we were feeling watching them, led us to the natural next step – gathering a team of dedicated volunteers, who were just as interested in this extraordinary group and their accomplishments as us. In February 2020, half a year after our first visit to Kadzinuni, where the women were trained in the process, we organized a two-day worskshop on biochar production and usage. And thus, our journey began.

Producing biochar: Getting down and dirty during a 2-day workshop

The community of 15 women, together with Patrick, the primary contact of the Exeter University in Kadzinuni, greeted us warmly on day 1 as they showed us around the village. They patiently explained the labour and skill that goes into the making of biochar. After two days of trying the process firsthand, we can confirm that it is not a task for the faint-of-heart! 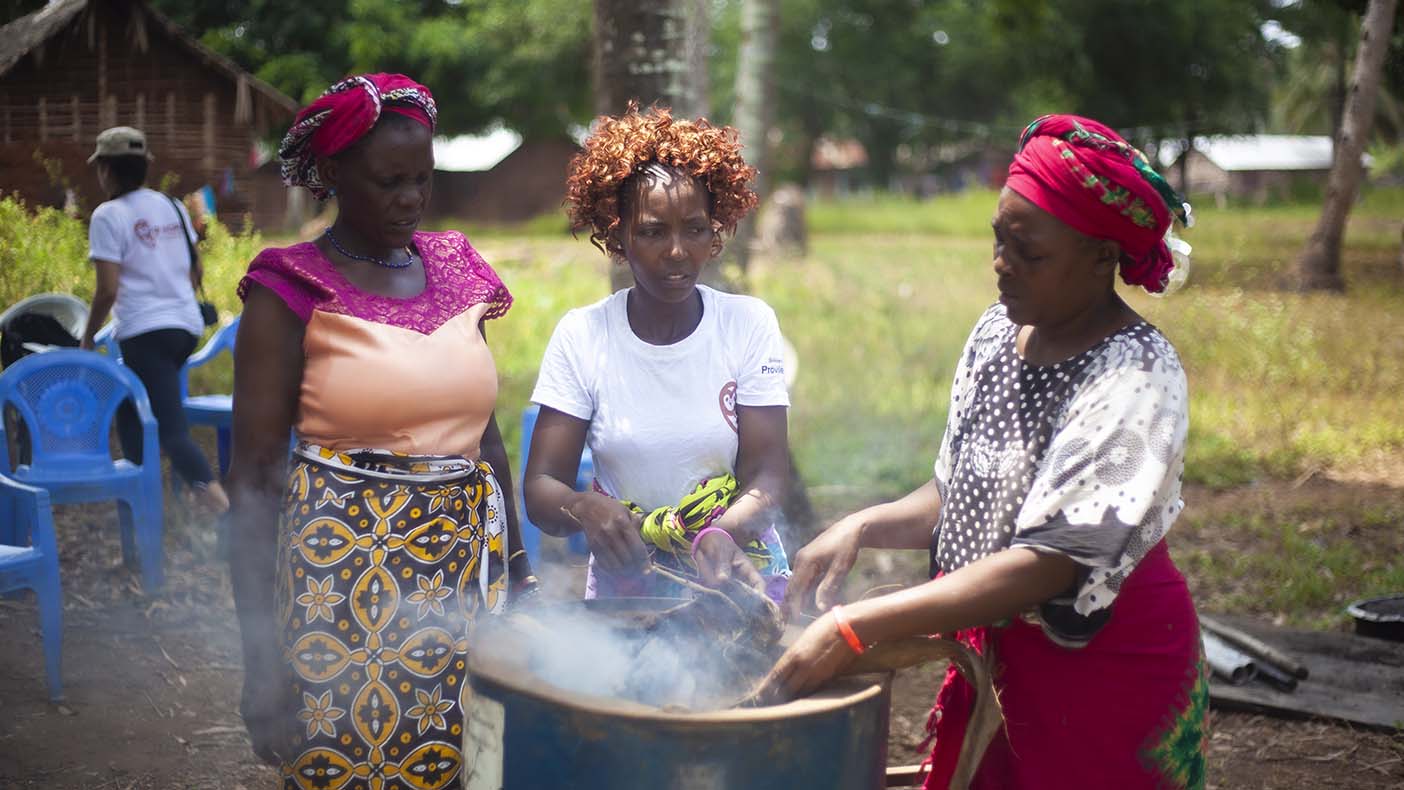 The process begins with gathering agricultural waste, such as coconut shells, which can be found in abundance in coastal Kenya. After the waste is gathered and brought back to the village, it is put into a double-barreled furnace where it goes through the process of pyrolysis with little or no access to oxygen. The remains of the now carbonized waste are then beaten and crushed into fine powder, which is then mixed with the cassava porridge and clay paste to produce a raw form of the future biochar. This mixture is then formed into briquettes, which are placed under the sun to dry out for 2 days. And voila, your green source of energy is ready to use! Biochar releases 50% less greenhouse gasses than the ones associated with the conventional charcoal.

While the process sounds relatively straightforward, it is very important to remember, that all the steps are fulfilled exclusively with manual labor. It took us hours to produce even relatively modest amounts (and took us two days to see the fruits of our efforts).

Future of biochar production in Kadzinuni

CR Hope Foundation currently aims to introduce machinery which can help reduce the physical burden on the women. In addition, it would increase production efficiencies and quality, which would allow the community to expand their business and start selling their product to nearby enterprises. 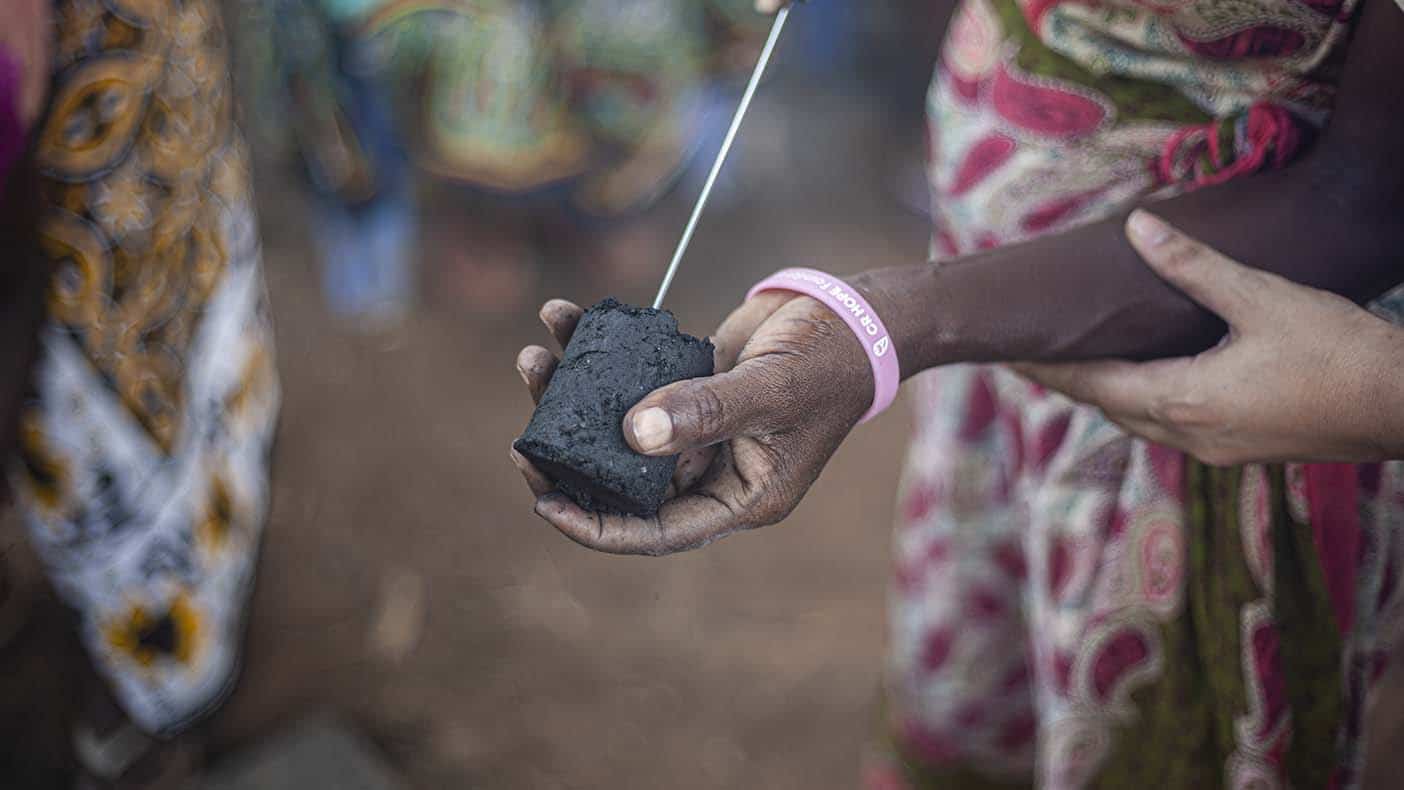 But why are we so excited about this whole idea? Is biochar really worth it?

Well, not only does it have a clear advantage over the conventional sources of energy when it comes to the environmental impact, it also provides an unprecedented opportunity for the local women to earn supplemental incomes. Over the eight months since the initial setup, women have generated money that they can spend on better clothing, children’s school fees or savings accounts for the tough times. Importantly, they have developed their business skills, connected with the neighboring communities and are empowering the next generation of girls by setting the right example – an outcome that cannot be overlooked or overestimated.

We at CR HOPE are immensely grateful to the Kadzinuni women for taking their time to teach us their art. We hope we can return the favor by attracting more dedicated volunteers to the program, who could hopefully spread the word and bring biochar to other communities, while empowering their members!

For any contribution or support to the project, please contact: info@crhopefoundation.org.

This website uses cookies to improve your experience while you navigate through the website. Out of these, the cookies that are categorized as necessary are stored on your browser as they are essential for the working of basic functionalities of the website. We also use third-party cookies that help us analyze and understand how you use this website. These cookies will be stored in your browser only with your consent. You also have the option to opt-out of these cookies. But opting out of some of these cookies may affect your browsing experience.
Necessary Always Enabled

Any cookies that may not be particularly necessary for the website to function and is used specifically to collect user personal data via analytics, ads, other embedded contents are termed as non-necessary cookies. It is mandatory to procure user consent prior to running these cookies on your website.